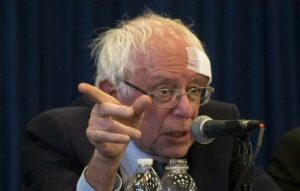 Last night at the debates, Bernie Sanders tried to defend his personal wealth, including the 3 homes he owns, after demanding the rich pay more to fund free healthcare for all. Sanders has said repeatedly that Big Pharma and Big Oil are evil corporations that are destroying the Earth and we must make radical changes to our economy to stop climate change.

But, journalist Peter Schweizer has uncovered the deep dark secret Sanders has been desperate to hide from his supporters. According to Schweizer, Sanders didn’t invest his $2.5 million fortune in solar and new age energy companies. Sanders is fully invested in Big Oil and Big Pharma. Fortune 500 companies to be exact. Chevron, Exon, health insurance companies and banks.

Part of Sander’s wealth came from books he sold to losers, but another chunk of his money came from his wife placing TV Ads for her husband’s camapigns and other politicians in Vermont collecting on average, 15% of the Ad buys for their campaigns. In fact, Sanders only endorsed two politicians in Vermont after they hired his wife to buy TV Ads for their campaigns.

Sanders is just another corrupt, lying politician pretending to be a socialist while profiting off his government service and investing his profits in Big Oil and Big Pharma.