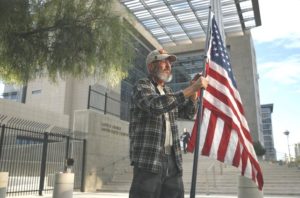 Two weeks ago, I was in the courtroom and observed a BLM officer testify under cross-examination by Ammon Bundy. The female officer was evasive while sitting with her arms crossed, arrogantly refusing to answer the simplest questions.  If I was a member of the jury I would certainly have serious questions about the government’s impartiality and professionalism in this case following her testimony. It was directly following her testimony that Judge Navarro, sent the jury home, closed the courtroom and seal the motion to dismiss.

Following that testimony that day two weeks ago, Federal Judge Gloria Navarro released the Bundys after two years in custody and now she has sent the jury home and is considering dismissing the charges or declaring a mistrial.

Navarro ordered the court cleared and sealed a hearing this week to discuss 14 alleged violations of the rules of evidence by the government for failing to properly and timely disclose and turn over to the defense. “The court is inclined to find that this information was not timely provided,” she announced.

“The federal government is required to produce documents that assist the defense,“ Cliven Bundy attorney, Bret Whipple said. ”The rules dictate fairness, and when the rules are violated the proper remedy is dismissal”, according to reports.

Under the law, the federal prosecutor must turn over all their evidence, even evidence that may help the defense. According to Wipple’s motion, the government has failed to timely turn over 14 pieces of evidence. According to legal experts, if it’s later discovered that the government failed to turn over evidence than any convictions they may obtain will be thrown out and the case sent back for retrial or dismissed. Lawyers have been sanctioned and even lost their law license for such practices in other cases in the past.

One court observer said, “It’s ironic that the Bundys are on trial for obstruction of justice, yet the government may be the one found to be obstructing justice by hiding evidence.”