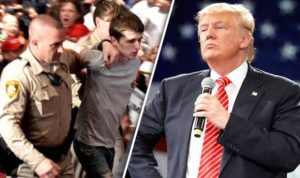 Michael Sandford, 19, tried to grab a Metro Officer’s gun at a Trump Rally Saturday. He was quickly arrested and turned over to federal authorities for prosecution. The possible attempted assassination occurred yesterday at the Trump rally at the Treasure Island in Las Vegas. Trump rallies have been marred by violent protests outside several events by liberal protesters with Democrats egging them on. Recently at another rally, a man tried to rush the stage Trump was speaking at. Democrats like Hillary Clinton recently claimed Trump was bringing the violence on himself by advocating for a border wall and freezing Muslim refugee programs.