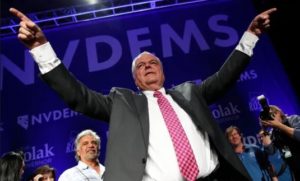 Last week a radical abortion bill, SB179, passed both the Nevada State Assembly and Senate in Carson City and the bill is on it’s way to Governor, Steve Sisolak’s desk for his signature. But Gov. Sisolak is a devote Catholic and Pope Francis just issued a clear statement on abortion in light of all the laws being passed throughout the U.S.

As reported by Fox News:

Pope Francis on Saturday likened abortion to hiring a hit-man and said the procedure can never be condoned, even if the unborn child is gravely sick or likely to die. Francis made the comments during a pro-life conference sponsored by the Vatican. He stressed that abortion isn’t a religious issue but a human one.

Bishop George Leo Thomas of the Diocese of Las Vegas said today “It is my sincere hope that both the Governor and Catholic members of the legislature will govern the State of Nevada in ways that reflect the sanctity of life and the vision of Catholic social teachings.”

Abortion could be a huge issue in 2020 for the thousands of Hispanics in Nevada who believe abortion is a mortal sin. But in a 2016 letter Pope Francis also wrote “no sin is considered too bad for forgiveness if the person seeking forgiveness is open to God and willing to avoid sin in the future.”