EVENT WITH VETERANS IN RENO TODAY 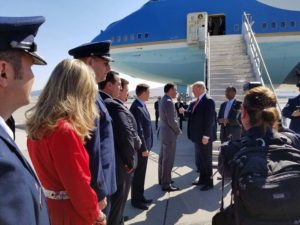 Today Governor Sandoval greeted President Trump at the Reno Airport as he arrived to address the American Legion’s National Convention Annual meeting. But Senator Heller skipped the Trump rally for veterans and signing of the choice and VA accountability act.

The President mentioned Heller at the event today several times, but based on past comments by both it was no surprise Heller passed on the event.