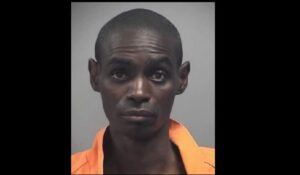 As reported by North Las Vegas Police, 35-year-old Tristan Tidwell was taken into custody without incident for the three deadly shootings that happened on September 6th, 2021. Tidwell has been booked into the North Las Vegas Corrections Center on three counts of open murder with a deadly weapon.

According to the District Attorney Steve Wolfson’s office, Tidwell had a warrant for a 2007 home invasion, grand larceny, and burglary and in 2018, Tidwell had been arrested for attempted robbery and burglary at a local bank in downtown Las Vegas. Wolfson hasn’t indicated whether he will seek the death penalty yet.

Tidwell is the poster child for a 3 Strikes Law in Nevada. His long violent crime spree goes back to at least 2005 he was sentenced to Boot Camp for 8 burglaries and Grand Larcenies he pled guilty to. A year later he was arrest and he pled guilty to another burglary where got probation. In 2007 he gets caught attempting another burglary, this time he got 12 months with time served. In July 2007 he’s charged with 2 Home Invasion robberies, which he gets 12 months for. While on bail awaiting the previous charges, he commits another burglary. His sentence “SIXTY (60) MONTHS MAXIMUM with a MINIMUM parole eligibility of TWENTY-FOUR (24)”.

While in prison he’s charge with “BATTERY BY A PRISONER”. He gets out and in 2011 is arrested and pleads guilty to 3 more crimes and is sentenced to “SENTENCED to a MINIMUM of TWELVE (12) MONTHS and a MAXIMUM of THIRTY-TWO (32) MONTHS.

In November 2018 Tidwell arrested and convicted of several more burglaries and gets 14 months.

Just 3 months ago Tidwell was in custody in court on more violent charges.

“Also present: Glen O’Brien, Deputy District Attorney, Arleen Heshmati, Deputy Public Defender, and Denise Baker of the Specialty Courts. Defendant present. There being no challenge by Defense Counsel, COURT FINDS Defendant COMPETENT pursuant to the Dusky Standard as Defendant is capable of understanding the nature of the charges against him and is able to assist counsel in his defense and ORDERED, pursuant to 178.420, matter TRANSFERRED back to the originating court for further proceedings. CASE CLOSED. CUSTODY 6/24/21 8:30 AM NLV JCT#3 FURTHER PROCEEDINGS: RETURN FROM COMPETENCY COURT”