OUTSIDERS HAVE NO BUSINESS TELLING VIRGINIANS WHAT STATUES THEY MUST KEEP

OUTSIDERS HAVE NO BUSINESS TELLING VIRGINIANS WHAT STATUES THEY MUST KEEP 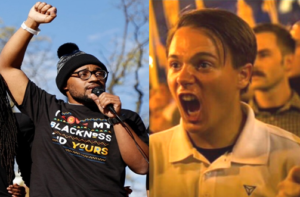 Outside agitators, like protestor Peter Cvjetanovic, have no business going to a city in Virginia and telling the people who live there what statues they must keep and which they can remove. And that goes for progressives as well.

Both extremes of the political spectrum, from the Neo-Nazis to the progressive socialists have a very bad habit of injecting themselves into local issues. The removal of a statue in Charlottesville is up to the people who live there. Progressive (regressives I call them) outside politically correct left-wing agitators have been on the march across the south pushing for the removal of Confederate Statues for the past couple of years. Now outside right wing groups are responding.

The progressives interjected themselves into local Charlottesville affairs, so the extreme right responded defending the statues. But neither group actually seemed to give a damn what the local people who live there want. It’s their city, if they want to remove a statue it’s none of our business. And if they want to keep the statues the left needs to stay out and mind its business. If the local government removes a statue against the will of the voters then they will be replaced at the ballot box.

This is why we must resist both extremes, for both threaten civil liberties in pursuit of their political objectives. Federalism and private property rights (I include local public property) are a far greater cause to defend because they protect us all against outsiders telling us what we can and cannot do in our states, cities, towns, and neighborhoods. That was the cause of George Washington and that is still our cause today.