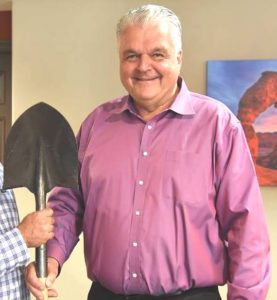 As Nevadans, we are proud to host the national convention for the American Legion this week. Nevadans everywhere recognize and honor these men and women for their service to our great country and are proud that they have decided to come together in our fine state. We hope that your visit this week focuses on honoring these American heroes.

However, like many Nevadans, I am deeply concerned by your recent comments defending white supremacists. Like the rest of our nation, my neighbors and I have witnessed with disgust recent demonstrations by fringe groups proclaiming hateful, racist, divisive rhetoric that goes against the basic decency that we have come to expect in our public debate. Even more troubling, these so-called alt-right white nationalist groups have sought to silence those who would oppose their misguided agenda with threats of – or in the case of recent disturbances in Charlottesville, VA – actual physical violence.

Americans fought fascism and crushed the Nazis in World War II, and anyone who waves a Nazi flag on our soil is, by very definition, anti-American. The disgusting displays of hatred and bigotry on display in Charlottesville dishonor all veterans who fought and died to stamp out fascism. We have one flag: the American flag. We are one people: the American people.

It is the responsibility of elected leaders to reject both the message and tactics of these fringe racist groups without fear or equivocation.

As president this responsibility falls to you above all others. It is your example that, more than anyone else, will reassure our citizens that they are welcome in this country irrespective of heritage, faith, or political beliefs. You set the tone for other leaders, especially those who rely on voters that support you for their own political fortunes.

So today Nevadans call upon you and all other officials who will be in attendance in Reno to lead by example.

We implore you to use the microphone your office affords and forcefully reject those who would deny the rights of their fellow Americans. Speak out against those who seek to silence their opposition with intimidation and, when that fails, outright violence. White supremacists, Nazis, the KKK and other fringe elements should be relegated to the dustbin of history, remembered with shame. Failing to denounce them provides the fuel they thrive on to spread their hateful rhetoric.

Now is the time to summon the courage to tell these hateful individuals – who may even support your political agenda – that their means of doing so is unacceptable in this country. We invite you and the other elected leaders of your party to join us and demonstrate that – though we may disagree – we are one country, united in our commitment to an open discussion of issues and ideas and all Americans are invited to take part in that great debate “with liberty and justice for all.”