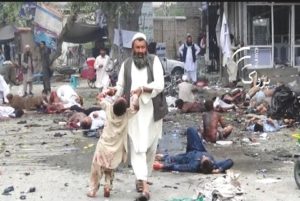 Yesterday, Saturday July 23, 2016, IS made its presence known to the world in Afghanistan by blowing up a peaceful protest in Kabul killing some 80 people and injuring more than 231 innocent civilians according to local authorities, where US troops are supposed to be maintaining order. This attack clearly indicates a failure of President Obama to contain IS and to bring stability to Afghanistan, where he had declared the war on terrorism won. Mr. Obama signalled to our enemies US intentions to leave Afghanistan some 3 or 4 years ago creating a repeat of the power vacuum he created in Iraq opening the door to IS there.

As if we needed any further proof of the corruption of the mainstream media, after a major bombing yesterday in Afghanistan, not one of the Sunday morning major network political talk shows even mentioned the entry of IS in Afghanistan. There was a total blackout of the attack. The reason maybe because they don’t want the public to see the failure of the Obama Clinton foreign policy as another Middle East country goes up in flames under their leadership just as the DNC convention is set to begin this week showcasing Obama/Clinton. After seven years of the Obama/Clinton foreign policy, the following countries are now IS and/or radical muslim terror zones, Yemen, Egypt (here the military stepped into stop the radical muslim take over), Libya, Syria, Iraq, Oman, Morocco and Afghanistan.

But Afghanistan is especially unique in that the US has spent blood and treasure to insure Afghanistan is no longer a safe zone for terrorists who threaten US security and interests around the world. The entry of IS in Afghanistan should be on the front page of every major newspaper in the nation and the main topic of every major political talk show this morning, yet not one word about it. Now we know whose side they are on.