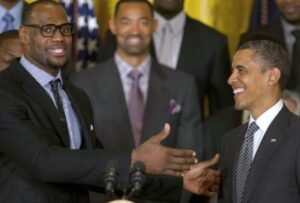 National Basketball Players Association President Chris Paul admitted to CNN that he spoke with community disorganizer, and BLM cheerleader Barrick Obama. Obama also spoke directly with LeBron James about their boycott. Obama is the Wizard of Ozz behind the curtain pulling his strings and causing the chaos we are seeing across the country.

CNN reported “Before NBA players decided to resume playing, National Basketball Players Association President Chris Paul reached out to Barack Obama, a person familiar with the call told CNN, and asked the former President if he would offer his counsel to a group of NBA players. The source also confirmed that Los Angeles Lakers star LeBron James was on the call. It was Paul, the source said, who organized the discussion.”

Obama’s spokesperson Katie Hill confirmed “When asked, he was happy to provide advice on Wednesday night to a small group of NBA players seeking to leverage their immense platforms for good after their brave and inspiring strike in the wake of Jacob Blake’s shooting.

“They discussed establishing a social justice committee to ensure that the players’ and league’s actions this week led to sustained, meaningful engagement on criminal justice and police reform,” Hill added.

No word on if Obama spoke with NFL and NHL players before their BLM boycotts.