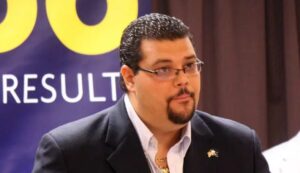 Nye County Commissioner Leo Blundo and his wife Melissa have led the charge against Sisolak’s mask and vaccine mandates since April 2021 of this year. This year, numerous Nevada rural counties, led by Republican elected leaders, passed resolutions declaring their own economic emergencies voiding Sisolak’s CV19 powers. Nye County passed a resolution 5-0 banning both mask and vax mandates. But now they’re back. Even though the mask mandate ban pasted the County Commission, the local Sheriff and county officials tried to enforce it at the meeting in May 2021.

Commissioner Blundo has hardened his position even more now. This week the County Commission met and Leo went maskless. Nye County voters clearly oppose the mask mandate and stand with Leo and his wife who was removed from the May meeting for refusing to wear her mask siting a real disability.

Gov. Sisolak issued an amendment to his latest mask mandate. Now it only applies to counties with more than 100K people. With some 46K folks, Nye County won’t be affected, for now.