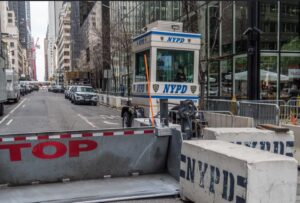 Out-of-state travelers could face up to $10,000 in fines if they break New York City’s two-week quarantine rule and checkpoints will be set up at entry points into the city, Mayor Bill de Blasio announced Wednesday.

Currently, travelers from 35 high-risk infection states and Puerto Rico must quarantine for 14 days. Those flying into New York airports are also required to fill out a special travel form — or face a $2,000 fine.

The new crackdown includes random checkpoints at major bridge and tunnel crossings and up to $10,000 fines for those caught breaking quarantine.

“The idea is we don’t want to penalize people,” de Blasio said at his daily press briefing. “We want to educate them, we want to make sure they’re following the rules.”

He added, “The important thing is the checkpoints are going to send a very important message that this quarantine law is serious.”

New York City Sheriff Joseph Fucito said the checks at key entry points into the city will be random and that his deputies will be “very visible.”

“The only way to have an effective checkpoint is having a random component to it,” he said at the briefing. “Let’s say it’s every six vehicles or every eight vehicles.”

“Compliance with the quarantine is our objective,” Fucito said.

New York City has seen an under 3 percent positive test rate for two full months — but one in five new cases of COVID-19 in the city is from an out-of-state traveler, de Blasio and head of the Test and Trace Corps Ted Long said.

Long said teams would also be deployed to Penn Station on Thursday to ensure that travelers are filling out the travel form. Phone calls will also go out to newly arrived travelers.

“If we can’t get through to you on the phone, we’ve now deployed teams to knock on your door and check in on you to make sure you’re safe,” Long said.

Hizzoner said the travel crackdown will remain in place indefinitely and could get even stricter.

“Having people see that these checkpoints are starting to happen around the city is going to send a powerful message,” he said. “If we think it’s an important tool … we might keep expanding it.”

“We’ve got to make clear to people there are consequences,” he added.

The NYPD also issued a memo Wednesday asking its civilian members to volunteer in their free time to help contact tracing of out-of-state travelers coming into Penn Station and Port Authority.

“Volunteers will be responsible to collect forms from travelers entering New York State, and reminding travelers of the mandatory self-quarantining protocols,” the memo obtained by The Post says.