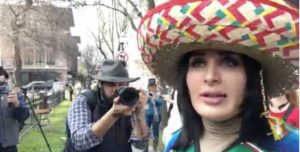 Wednesday, Conservative Activist Laura Loomer and a few friends jumped over wall of the California Governor’s Mansion dressed in sombreros, ponchos and fake mustaches to protest California’s sanctuary city polices. California’s new Governor, Gavin Newsom, has been an outspoken critic of Trump’s plan to build a wall on the southern border. Loomer and her friends were arrested and taken into custody shortly after they jumped the wall with news cameras in hot pursuit.

Loomer has been in the news over the past month when jumped over the wall of Democrat House Speaker Nancy Pelosi’s home, interrupted congressional hearings and chained herself to the doors of Twitter’s New York offices after they banned her for making comments critical of ant-Semite activists.