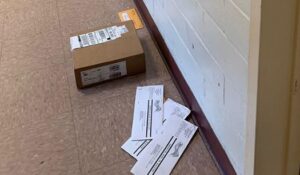 According to The Public Interest Legal Foundation, who reviewed some 1.3 million ballots Clark County sent out for the June Primary, 223,000 were marked by the Post office as “undeliverable”. 17 percent of all ballots mailed to registered voters had the old outdated addresses in Clark County.

“The addresses that we used were provided by the voters when they registered,” Dan Kulin, a spokesman for Clark County said

President Trump just filed a lawsuit against Nevada SOS Barbara Cegavske who authorized the mail-in-ballot scheme in the June primary.

But, the Clark County Elections Department hasn’t removed the 223,000 voter registrations to date as required by law.

PILF communications director Logan Churchwell said “The Nevada governor is foolish to think he can replicate his regional neighbors’ years of development and practices with mail voting in a matter of months with a weekend emergency bill.”