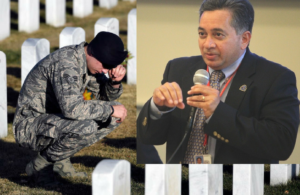 Nevada State Board of Medical Examiners, is the agency responsible for investigating complaints about doctors. Their Mission statement reads:

The Nevada State Board of Medical Examiners serves the state of Nevada by ensuring that only well-qualified, competent physicians, physician assistants, practitioners of respiratory care and perfusionists receive licenses to practice in Nevada. The Board responds with expediency to complaints against our licensees by conducting fair, complete investigations that result in appropriate action. In all Board activities, the Board will place the interests of the public before the interests of the medical profession and encourage public input and involvement to help educate the public as we improve the quality of medical practice in Nevada.

Most of the doctors who work at the VA are licensed by the State of Nevada. Which means they fall under the Nevada State Board of Medical Examiners supervision. So in Dec 2017 a formal complaint was filed against Dr. Ramu Komanduri, the Chief Doctor of the Southern Nevada VA with the Nevada State Board of Medical Examiners over the deaths of several Veterans. The complaint alleged that the Chief Doctor of the VA, who is licensed by the state of Nevada, failed to properly supervise his medical staff allowing serious errors leading to the deaths of Veterans. To date Nevada State Board of Medical Examiners has refused to take any action. In addition, they claim the investigative process is secret. There is literally no oversight by the public of investigations into bad doctors. And this is standard procedure for our Nevada State Government regulatory process. They operate completely in secret.

The medical board sent me an letter on June 6, 2019 claiming they are still investigating the Dr. now more than a year and a half after the initial complaint. Allowing the doctors to continue to supervise hundreds of medical staff without any discipline to date for the deaths of veterans 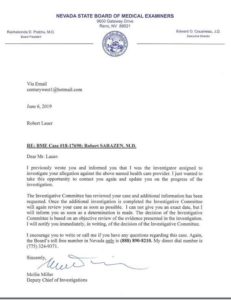