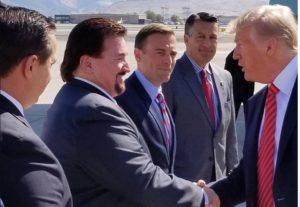 This week, Nevada GOP Chairman Michael J. McDonald announced that President Trump will be headlining the GOP State Party Convention at the Sun Coast Hotel. While President Trump is in town he will also attend a fundraiser for Nevada U.S. Senator Dean Heller.

This is a huge win for McDonald who has fully supported the President practically from the beginning. And the NV GOP State Party is the winner of McDonald’s efforts which is expected to see a huge boast to its bottom line from ticket sales and fundraising because of Trump’s appearance.

McDonald has also successfully at built a voter registration army in an effort to shrink the Democrats significant voter registration advantage. The NV GOP party moves forward in the fall elections with a Nevada economy growing at 40,000 jobs per month, a new Championship Hockey team and the power of the Presidency on full display this weekend.