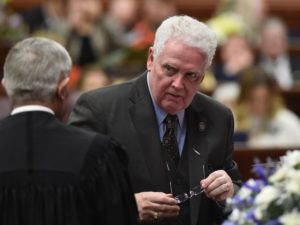 Fall down drunk, Speaker Hambrick over saw, in last week’s election, the worst loss of Republican State Assembly seats in the last 100 year. Hambrick, thought once as the most conservative legislature in Carson City, supported Gov. Sandoval’s historic tax increase of $1.5 Billion dollars breaking his no new tax pledge to loyal voters and supporters.

In 2014, Republicans swept into power in Nevada, especially in the State Assembly winning a governing majority for the first time since the 1920’s. They campaigned and won on a no new tax platform. But before the election victory ink was even dry, Hambrick broke his word and joined Gov. Sandoval by supporting the first ever commerce tax or income tax in our state’s history. The voters had just rejected a similar tax by over 80%. The breach of trust caused a civil war to break out within the party, resulting in several of the tax and spend RINO’s being defeated in the primary and many more loosing in the general election last week. Many people voted for “None these Candidates” rather than Hambrick’s RINO’s in the general eleciton. The result was, Republicans lost over 10 Assembly seats and lost their governing majority. Hambrick blew a once in a lifetime chance in two short years.

According to sources, Hambrick, who won re-election in a safe Republican seat, is  stepping aside and will not run for party leadership. Conservatives are set to take back control of the Assembly leadership tonight when they vote.

The great purge I supported after the primary to get rid of Assemblyman Derek Armstrong Assemblyman Gardner and Assemblyman Stephen Silberkraus and the rest of the RINO’s resulted in a clean slate and a new opportunity to rebuild the party brand with REAL Republicans.

Speaker Hambrick and the RINO’s thought having Jon Ralston’s approval meant they were popular and a sure bet for reelection.