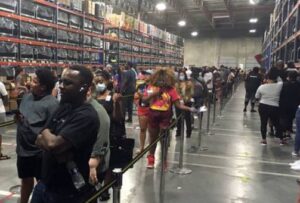 “Under the Nevada Open Records Act (NRS.239), revised under SB287 taking effect October 1, 2 019, we are requesting all of the following documents:

The DMV responded within hours refusing to provide the data requested claiming privacy concerns. The public records request was a follow up to our request last week in which the public learned that 68,000 illegal aliens in Nevada have an active Driver’s Authorization Card as of Oct. 2020.

The Clark County Elections Department only removed 30 people from the voter rolls in 2018. We also know;

Back in March 2017 NV SOS Barbara Cegavske signed a deal with the ACLU and Mi Familia Vota Education Fund to require the DMV to accept all voter registrations, even from non-citizens and pass those on to county elections departments. The DMV transmitted thousands of voter registrations to County Elections Departments since 2017 without red flagging them.

Since 2017, Limited Term Licenses issued to non-citizens when SOS Cegavske signed the settlement agreement with the ALCU and MI Familia were sent a mail-in-ballot from various county elections departments.

Assuming 2019 had an average of 11,000 new permanent residents, over 77,167 green card holders since 2013 were eligible to obtain a Nevada Driver’s license and would have then received a mail in ballot under the new opt out motor voter law that went into effect last year. That doesn’t take into count the tens of thousands more green card holders who’ve been in the country for many years prior.

What we don’t know is how many of non-citizens and illegal aliens received mail-in-ballots and how many voted in this election. The public needs the data from the NV DMV to compare to voter rolls.