LOMBARDO IS RUNNING FOR REELECTION IN 2018

LOMBARDO IS RUNNING FOR REELECTION IN 2018 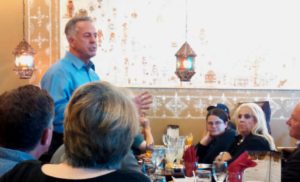 Yesterday while speaking at a local Asian group, SAPNA, Joe Lombardo announced he was running for reelection in 2018. But according to local political sources, Lombardo’s Internal re-eleciton numbers are hovering around 38%, forcing him to start campaigning now for next year’s 2018 mid term elections. Lombardo has been embroiled in controversy over his sanctuary city policies that were recently highlighted by ICE illegal criminal alien detainer reports listing Las Vegas Metro Police as the number one offending county in the entire country.

Just last week, US Attorney Jeff Sessions issued a cease and desist letter to eight jurisdictions nationwide including Las Vegas to stop Sanctuary City Policies or face losing federal grant money. In the letter Session demands Metro Police prove they are in compliance or risk losing federal money. Lombardo has until June 30, 2017 to comply or lose over $6 million in federal grant money according to Session’s letter.

No challengers have officially announced yet but many people are quietly encouraging Retired Metro Lt. Randy Sutton to challenge Lombardo. Sutton has become a national figure representing Blue Lives Matter and he is the most decorated Metro Police Officer in the department’s history. Sutton has strong name ID already and a national audience to raise money from.