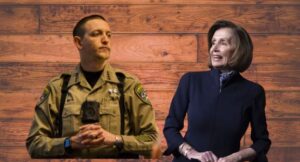 Citing January 6th Capitol riots, last week Dems passed HR3237, a $2 Billion bill to fund the Capital Police turning them into a new National Police Force with offices across the country. The Capital Police would be loyal to Nancy Pelosi with the intent to take on and take out the Constitutional Sheriff’s who’ve sworn an allegiance to protect the 2nd Amendment. Immediately after passing, concerns over the bill’s legal and constitutional authority are prompting many Constitutional Sheriffs to speak out.

The U.S. Constitution gives Congress the power of the purse to authorize the spending of government operations and to pass civil and criminal laws. The Executive Branch is authorized to enforce the laws Congress passes with the institutions like the FBI, Federal police and the Department of Justice. But Dems now want their own National Police Force with intelligence capabilities to overrun the Constitutional Sheriffs who’ve publicly sworn an oath to stop any Unconstitutional laws and orders.

Nevada’s first Constitutional Sheriff, Eureka County Sheriff Jesse Watts, who has been one of the more outspoken Nevada Sheriffs regarding NV Governor Steve Sisolak’s CV19 mandates and gun laws. Sheriff Watts issued the following statement “No federal agency will have the authority to enforce unconstitutional laws in my county” Sheriff Jesse Watts said when he heard about HR3237 being passed.

HR3237 seems to be putting the Dems in the Federal Government on a collision course with some 1,200 counties across the country as Dems label anyone who espouses support for the Constitution a threat.