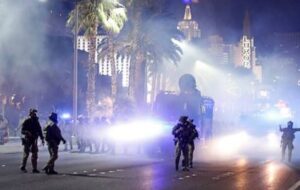 Biden DOJ just can’t help themselves. Their double standards on full display as BLM Rioters in Las Vegas are sentenced this week for actually vandalizing the Federal courthouse on Las Vegas Blvd. A riot that resulted in one Las Vegas Metro Police officer shot in the head. Not one of those BLM rioters was sentenced to prison so far. 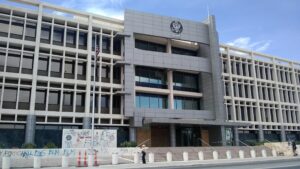 Alexander Kostan, 22, pleaded guilty in April to looting United States property was sentenced this week to three years probation and six months of house arrest by Obama appointee, Federal Judge Andrew Gordon. The sentence was the least he was allowed to hand out under federal law. According to reports they caused some $70K in damages.

Kelton Simon, 35, and Alejandro Avalos, 28 – have also pleaded guilty and are awaiting conviction.

This last week a Federal Judge sentenced Paul Hodgkins, 38 who waived a Trump 2020 flag in the U.S. Capital riots in the house chamber to 9 months in prison.

While the Biden FBI brags it’s arrested some 500 Capital rioters since Jan 6th, they’ve seemed to forgotten all about the thousands of Antifa and BLM thugs who burned and looted our cities and killed dozens of Americans last summer.