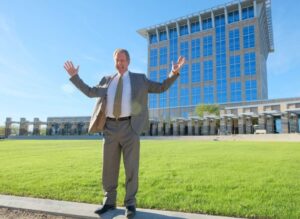 North Las Vegas Mayor John Lee has been a fairly conservative leaning Democrat for years. As a small business owner he ran for the State Legislature and won a Senate seat. Then, after being defeated in a primary by a far left Dem he ran for Mayor of North Las Vegas right in the middle of a huge economic crisis in the city.

The city was broke and this was after they committed millions in loans to fund a huge new city hall. John Lee turned the near collapse around and now the city is growing again.

Lee appeared on Fox and Friends to announce his change to the Republican Party, citing the recent takeover of the Nevada Democrat Party by Socialists. Lee went on to declare that he voted for Trump in both Presidential elections. He also said his commitment to pro-life and pro-gun are incompatible with today’s Democrat Party.

Lee is positioning himself to run for Nevada Governor according to sources.