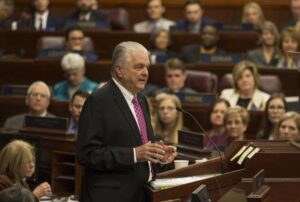 The NEVADA OSTEOPATHIC MEDICAL ASSOCIATION just filed a new lawsuit accusing Nevada Governor Sisolak and the Nevada Board of Pharmacies of practicing medicine without a license when they banned Doctors from prescribing hydroxychloroquine to patients stricken with COVID19 until they so sick they ended up in a hospital, violating Nevada and federal law.

The lawsuit goes on to state “The Emergency Regulation violates Plaintiffs’ and their patients’ constitutional rights to privacy—the right of an individuals to protect their health by making autonomous decisions about medical treatment with a physician of their choice is a fundamental right that cannot be abridged or dictated by Defendants and no justification was provided by the BOP that would warrant such an intrusion, not even a declaration by the Governor of a state of emergency.”

Even though drug makers have produced over 30 million doses since Gov Sisolak’s March 23, 2020 Emergency order banning hydroxychloroquine, Gov. Sisolak refuses to lift the ban on the drug. Gov Sisolak’s Department of Corrections was caught hoarding the drug right after the ban was issued. 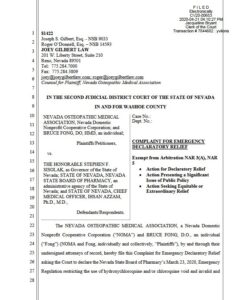