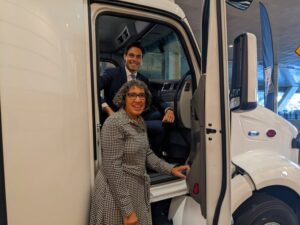 Crazy California Dems continue to disrupt and create uncertainty in the supply chain. First Cali banned diesel trucks built before 2010 without a DEF filter system in 2020. Thousands of owner-operators were forced to sell their perfectly good trucks for pennies on the dollar to out-of-state trucking companies. Then buy overpriced replacement trucks that comply with Cali’s new rules. Then Cali outlawed owner-operated independent truckers. Top that off with the highest gas prices in the country.

Every single item imported from overseas comes through the California ports and is transported on trucks to Nevada. Living on a desert island, Las Vegas depends on truckers to survive. What Crazy Cali does directly affects our bushiness and the price of everything we pay at the stores.

So now Crazy Cali wants to ban all diesel semi-trucks by 2040. Keep in mind that they could not keep the lights on in Cali this summer. New electric semis may be around the corner, but their cost is projected to be double that of a new diesel truck. It takes 500 horses to haul 70,000 pounds up the Cajon pass.Truckers can go from LA to Vegas and back on a single tank of gas.

Political appointees on the Air Resource Board’s draft proposal mandate that all medium-duty and heavy-duty trucks entering ports and rail-yards must be zero-emission, with state and local government fleets reaching the standard by 2027.

The Air Resource Board is led by folks who have never driven a truck in their lives, like the chairwoman, Liane Randolph, a far-left environmental lawyer.

The board put out the following statement, sighting the climate change fraud.

“In California, climate change is contributing to an escalation of serious problems along with worsening air quality challenges, including raging wildfires, coastal erosion, extreme weather, disruption of water supply, threats to agriculture, spread of insect-borne diseases, and continuing health threats from air pollution,”

Climate change is a scam. The climate has been changing forever, not just in the last 20 years. The temperature on Earth was much warmer than it is today when the Vikings had farms. Yes, Greenland used to be green. Our own government admits it in a 2017 article in the Smithsonian magazine titled

Why Did Greenland’s Vikings Vanish? “They (the Vikings) discovered Greenland during a time known as the Medieval Warm Period, which lasted from about 900 to 1300 AD. Sea ice decreased during those centuries, so sailing from Scandinavia to Greenland became less hazardous. Longer growing seasons made it feasible to graze cattle, sheep, and goats in the meadows along sheltered fjords on Greenland’s southwest coast. In short, the Vikings simply transplanted their medieval European lifestyle to an uninhabited new land, theirs for the taking. “

In 1400 AD, the greatest challenge (for the Vikings) —and the coup de grâce—came when the climate began to cool.”

Climate history proves that, as promoted by Democrats today, climate change propaganda is a scam. The temperatures on Earth have radically warmed and cooled over the last 1,000 years without gas-powered cars.

But there’s one major problem with this plan. No automakers are building electric semi-trucks yet. Crazy California’s Climate Change plan is directly driving up our food prices and hurting our people. We need Nevada’s leadership to fight to reign in Crazy Cali. Sisolak is all following Gavin Newson’s lead. If Sisolak and the Dems win this November, expect them to continue their war on the free market and self-employed in the Nevada legislature.