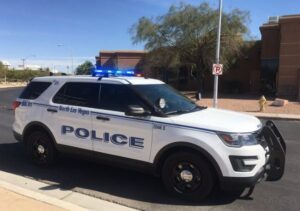 Crazy Dems who run North Las Vegas, the city with the worst public safety record and the murder capital of Nevada, now wants to remove the citizenship requirement for police in Nevada. The city of North Las Vegas has introduced legislation in the up-coming Nevada legislative session to change the law so they can hire non citizens including DACA’s to police their community.

The police we spoke with said they are deeply worried about Cartels penetrating police departments under such rule changes. And this poses a national security threat by allowing Communist Chinese to slip into our police departments.

Local commercial property mangers we spoke with complained about the city’s failure to follow up on burglaries and other criminal activities they continue to suffer with. One commercial property manager complained about homeless sleeping in front on the sidewalks, shootings in his parking lot and stores burglarized. He told 360 “The cops do nothing”.

Summary: Revises provisions relating to the employment of peace officers.
Here is a copy of the bill language.

So far no lawmakers have co-sponsored the bill. If you are concerned about this bill here are a list of law makers on the committee that will be taking up AB30.