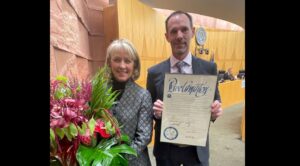 Yesterday, the all Dem Clark County Commission honored Republican Barbara Cegavske at their meeting. Cegavske has been the Republican Secretary of State for the past 8 years. Her record reads like a Democrat; she signed a deal with the ACLU to allow illegal aliens to register to vote through the DMV; she blocked the Green Party candidate from the ballot in 2016 helping Hillary Clinton win Nevada; she supported Sisolak’s EO for mail in ballots; and she fought Trump’s lawsuits. Cegavske worked with FB and other groups in the 2022 election. She helped Aaron Ford by allowing an unqualified third-party candidate to remain on the ballot. She refused to enforce any laws or rules that hurt Dems. She left Ross Miller’s staff in charge of the agency. She refused any oversight and fought any effort at providing transparency. It’s no surprise that Democrats are now honoring Barbara Cegavske.

She was so bad that On April 11, 2021, the Nevada Republican Central Committee held their annual meeting where they passed a resolution censuring Nevada Secretary of State Barbara Cegavske after she lied about investigating voter fraud allegations in the 2020 elections. Since her censure, Cegavske’s office performed a cursory investigation finding dozens of folks who did voted twice, were dead or lived out of state. To date, Cegavske has refused to charged a single person with violating the law. 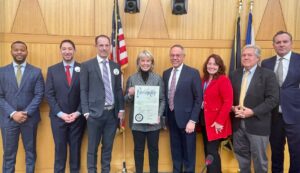 The Clark County Commission statement says it all:

Ms. Cegavske started out as a Nevada Assemblywoman and climbed up – eventually winning election to the Secretary of State’s office in 2014. As Secretary of State, Ms. Cegavske’s primary role was guiding Nevada’s elections – a challenging task she and her office handled with grace and dignity while facing intense scrutiny, especially over the last 2 election cycles.