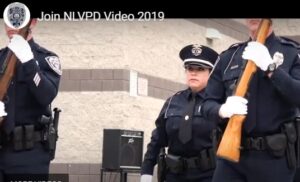 The North Las Vegas Police Department, which has turned North Las Vegas into the murder capital of Nevada, with a 400% increase in murders in the last 6 years, just announced they are setting a goal of hiring 30% women in their current recruiting efforts. The affirmative action hire white female with a Latina last name Police Chief Pamela Ojeda announced the WOKE hiring policy this week. At the time, the media celebrated the city passing over highly qualified white men when they hired Ojeda as the Police Chief. 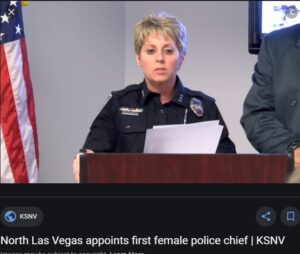 9 Shot, 2 dead on the 4th of July, sounds like headlines from Chicago or Detroit, but its North Las Vegas, the Murder capital of Nevada. Prior to Police Chief Ojeda there were 7 murders in the North Las Vegas that year. Since then the murder rate spiked 400%.

“Hello All, we have accepted a challenge where 30% of our police department will be represented by women by 2030. Do you think you can help us achieve this challenge?”

The State of California is facing a lawsuit this week over setting hiring goals for Corporate Board of Directors. North Las Vegas expressed gender quote hiring goals of 30% are unconstitutional.

The legislation’s quota system for female representation on corporate boards employs express gender classifications. As a result, SB 826 is immediately suspect and presumptively invalid and triggers strict scrutiny review. See e.g., Connerly v. State Personnel Bd., 92 Cal. App. 4th 16, 40-44 (2001); Cal. Const., art. I, § 31.
Because gender classifications are necessary to SB 826’s quota system, the legislation can only be
justified by a compelling governmental interest, and its use of gender classifications must be narrowly
tailored to serve that compelling interest. Connerly, 92 Cal. App. 4th at 44. As Defendant cannot make
these difficult showings and SB 826 cannot be interpreted to preserve the legislation’s quota system’s
validity, it is unconstitutional and any expenditure of taxpayer funds or taxpayer-financed resources
enforcing or otherwise carrying out the quota system is illegal