MY ENCOUNTER WITH VP JOE BIDEN: BY LUCY FLORES

MY ENCOUNTER WITH VP JOE BIDEN: BY ASSEMBLYWOMAN LUCY FLORES 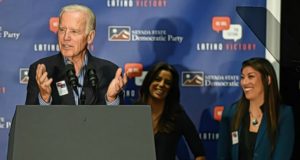 As Reported in THE CUT:

In 2014, I was the 35-year-old Democratic nominee for lieutenant governor in Nevada. The landscape wasn’t looking good for my party that year. There were no high-profile national races to help boost turnout, and after the top candidate bowed out of the governor’s race, “None of the Above” ended up winning the Democratic primary.

So when my campaign heard from Vice-President Joe Biden’s office that he was looking to help me and other Democrats in the state, I was grateful and flattered. His team offered to bring him to a campaign rally in an effort to help boost voter turnout. We set the date for November 1, just three days before election day.

In a state as large but sparsely populated as Nevada, it takes nonstop travel to connect with all its residents. You’re lucky to get properly fed, much less look properly coiffed as female candidates are often required to do. I was exhausted and short on time, so decided to not to wash my hair the morning of the rally. I sprayed some dry shampoo in my hair, raced off to the Reno airport, and flew back to Las Vegas.

The event proceeded as most political events do: coordinated chaos with random problems that no one can predict. I found Eva Longoria, co-founder of the Latino Victory Project, roaming the parking lot trying to figure out how to get inside the union hall. My staff was running around town trying to purchase ferns because according to Biden’s team, no other vegetation was acceptable for the stage.

I found my way to the holding room for the speakers, where everyone was chatting, taking photos, and getting ready to speak to the hundreds of voters in the audience. Just before the speeches, we were ushered to the side of the stage where we were lined up by order of introduction. As I was taking deep breaths and preparing myself to make my case to the crowd, I felt two hands on my shoulders. I froze. “Why is the vice-president of the United States touching me?”

I felt him get closer to me from behind. He leaned further in and inhaled my hair. I was mortified. I thought to myself, “I didn’t wash my hair today and the vice-president of the United States is smelling it. And also, what in the actual fuck? Why is the vice-president of the United States smelling my hair?” He proceeded to plant a big slow kiss on the back of my head. My brain couldn’t process what was happening. I was embarrassed. I was shocked. I was confused. There is a Spanish saying, “tragame tierra,” it means, “earth, swallow me whole.” I couldn’t move and I couldn’t say anything. I wanted nothing more than to get Biden away from me. My name was called and I was never happier to get on stage in front of an audience.

By then, as a young Latina in politics, I had gotten used to feeling like an outsider in rooms dominated by white men. But I had never experienced anything so blatantly inappropriate and unnerving before. Biden was the second-most powerful man in the country and, arguably, one of the most powerful men in the world. He was there to promote me as the right person for the lieutenant governor job. Instead, he made me feel uneasy, gross, and confused. The vice-president of the United States of America had just touched me in an intimate way reserved for close friends, family, or romantic partners — and I felt powerless to do anything about it.

Our strange interaction happened during a pivotal moment in my political career. I’d spent months raising money, talking to voters, and securing endorsements. Biden came to Nevada to speak to my leadership and my potential to be second-in-command — an important role he knew firsthand. But he stopped treating me like a peer the moment he touched me. Even if his behavior wasn’t violent or sexual, it was demeaning and disrespectful. I wasn’t attending the rally as his mentee or even his friend; I was there as the most qualified person for the job.

Time passed and pictures started to surface of Vice-President Biden getting uncomfortably close with women and young girls. Biden nuzzling the neck of the Defense secretary’s wife; Biden kissing a senator’s wife on the lips; Biden whispering in women’s ears; Biden snuggling female constituents. I saw obvious discomfort in the women’s faces, and Biden, I’m sure, never thought twice about how it made them feel. I knew I couldn’t say anything publicly about what those pictures surfaced for me; my anger and my resentment grew.

Had I never seen those pictures, I may have been able to give Biden the benefit of the doubt. Had there not been multiple articles written over the years about the exact same thing — calling his creepy behavior an “open secret” — perhaps it would feel less offensive. And yet despite the steady stream of pictures and the occasional article, Biden retained his title of America’s Favorite Uncle. On occasion that title was downgraded to America’s Creepy Uncle but that in and of itself implied a certain level of acceptance. After all, how many families just tolerate or keep their young children away from the creepy uncle without ever acknowledging that there should be zero tolerance for a man who persistently invades others’ personal space and makes people feel uneasy and gross? In this case, it shows a lack of empathy for the women and young girls whose space he is invading, and ignores the power imbalance that exists between Biden and the women he chooses to get cozy with.

For years I feared my experience would be dismissed. Biden will be Biden. Boys will be boys. I worried about the doubts, the threats, the insults, and the minimization. “It’s not that big of a deal. He touched her, so what?” The immediate passing of judgement and the questioning of motives. “Why now? Why so long after? She just wants attention.” Or: “It’s politically motivated.” I would be lying if I said I didn’t carefully consider all of this before deciding to speak. But hearing Biden’s potential candidacy for president discussed without much talk about his troubling past as it relates to women became too much to keep bottled up any longer.

When I spoke to a male friend who is also a political operative in Biden’s orbit — the first man who had heard the story outside of my staff and close friends years ago — he did what no one else had and made me question myself and wonder if I was doing the right thing. He reminded me that Biden has significant resources and argued points that made me question my memory, even though I’ve replayed that scene in my mind a thousand times. He reminded me that my credibility would be attacked and that I should be prepared for the type of “back and forth” that could occur. (When reached by New York Magazine, a representative for Vice-President Joe Biden declined to comment.)