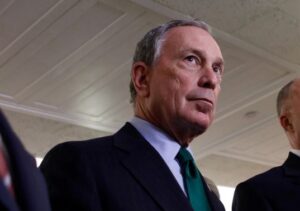 Mike Bloomberg is like a dog with too many bones. He starts chewing on one bone then drops it for another and another. There is nothing in the material world that Mike Bloomberg cannot buy. Private jets, homes, companies, anything his heart desires, except the Presidency. He believed, cynically, that he could literally overwhelm the system with $500 million plus and buy the Democrat Nomination and then the Presidency. But you cannot buy a personality.

Bloomberg could not hide his huge ego and obvious contempt for the average American. His extreme arrogance came blaring through when he declared “I bought the Democrat majority”, which may be why they let him on the stage when he did not qualify. Here in Nevada, Bloomberg help buy the Democrat majority and he certainly bought our gun control laws with some $29 million. He then tried to explain why he needs former police officers armed with guns but you peasants don’t need a gun to protect your families.

But now that his monster ego has been shattered, now that Bloomberg has realized the Dems have been using him for his money like a stripper uses a 50 yr old puggy guy to pay her rent, his resentment will kick in. After all he’s done for the Democrat Party and the only prize he has is Samoa. He lost to Bernie Sanders; imagine the humiliation Bloomberg must be feeling this morning.

Today, Mike Bloomberg is assessing whether he can take any more humiliation or whether he’ll quit the race all together. One thing is for sure, he’s done being the Democrat Party’s sugar daddy. Like all spoiled children, he will takes his toys and go home.