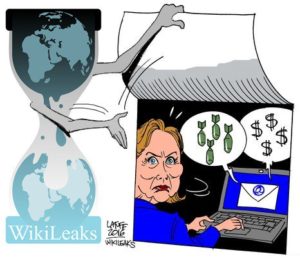 Today is another Media Dump Friday! If you really want to know the real dirt from the government and political campaigns watch and read the news on Fridays where news and documents are dumped in hopes they die over the weekend.

The emails show a clear biased by top DNC officials against Bernie Sanders and in favor of Mrs. Clinton. The DNC uses words like“they and us” over and over to describe the Sanders campaign “We have the Sanders folks admitting that they lost fair and square, not because we ‘rigged’ anything,” one email said.
Another emails states “It’s not a DNC conspiracy, it’s because they never had their act together,” a DNC official said.
“It’s clear that Bernie messed up and that we’re on the right side of history,” Luis said in another bullet point, referring to the Nevada convention.
https://wikileaks.org/dnc-emails/emailid/5423
It appears Bernie Sanders supports may have been right when accusing the DNC of rigging the system in favor of Mrs. Clinton.
To read through the 20,000 emails yourself here is the link, enjoy.
www.wikileaks.org/dnc-emails/