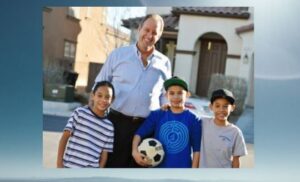 Yesterday, North Las Vegas Mayor John Lee announced his intentions to run for Nevada Governor, but by the end of the day he was announcing he also had CV19.  Lee made the announcement on his Facebook page. Lee, a stage 4 cancer survivor, says he’s feeling good and has no symptoms so far. Lee also went on to say he did not get the jab yet.

Lee’s vaccine admission will certainly be politicized by pro-vax folks.