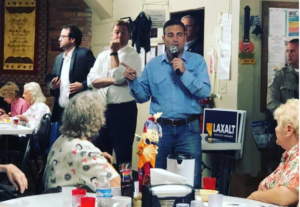 Today, Nevada Republican Gubernatorial Candidate Adam Laxalt and Michael Roberson campaigned in Nye County Pahrump trying to stop the bleeding as Independent Candidate Ryan Bundy grabs endorsements and votes in the conservative hotbed. The rurals were supposed to Laxalt’s bedrock voters, but ever since June 2018 Laxalt has been under water in Nye County with base voters.

In addition, Laxalt has been under fire in Nye County after his office defended a lawsuit in court against the Nevada State Water Chief Engineer Jason King who issued order 1293 taking water entitlements away from land owners in Nye County. The 11,000 well owners in Nye County are now up in arms against Laxalt attacking him in radio ads and billboards over his stance on order 1293A.

Nye County has more than 27,000 voters Laxalt desperately needs to hold on to if he is going to defeat Clark County Commissioner Steve Sisolak. Bundy has campaigned hard on water and land issues across the state especially in Nye County. If Bundy takes just 5% of the votes, Sisolak could win the election. 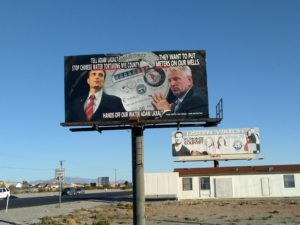