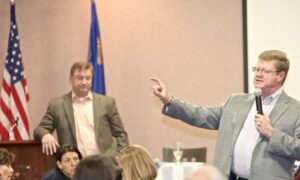 Last year, Nevada Republican Congressman Mark Amodei made national news when he was the first Republican in the Congress to support Nancy Pelosi’s Trump Impeach inquire. Shortly thereafter, Trump fired him from Nevada’s Trump Reelection team. Now he’s siding with Sisolak over Trump on the issue of mail-in-ballots.

Dems in the Nevada legislature just pass AB4, which lets the Governor declare an emergency and steal election authority from the Nevada Secretary of State and then authorize mail-in-ballots. Dems did this in the middle of the night over the weekend drawing Trump’s fury promising to sue Sisolak in court. Trump accused the Dems of trying to steal the election through mail-in-ballots.

Pres Trump’s tweeted out “In an illegal late night coup, Nevada’s clubhouse Governor made it impossible for Republicans to win the state. Post Office could never handle the Traffic of Mail-In Votes without preparation. Using Covid to steal the state. See you in Court!”

Well, here comes Mark Amodei standing with Dems again. BTW Amodei has voted with Nancy Pelosi over 57% of the time over his career in Congress. Amodei, speaking with liberal Dem news outlet, The Independent, told them Trump’s tweet wasn’t “helpful” and went on to say  “Am I going to say they’re trying to steal the election? No.”