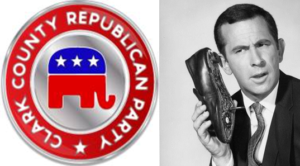 Even though the email failed to name any of the “Crew”, Jo McDonald blasted the email on her Facebook Page self-identifying herself in the process. Jo McDonald is currently running for Clark County Vice Chair, on a slate with Carl Bunce who is running for Chairman. Her husband is the Chairman of the Nevada Republican Party, Michael McDonald.

Jo McDonald was involved in a very public feud with the past Chairman, Dwight Mazzone. Some in the party are speculating that Mazzone is behind the anonymous email blast using the CCRP email list to strike McDonald days before the vote this Tuesday.

The CCRP has been dysfunctional for years, but last year it was exceptionally incompetent only raising $10,000 the entire year and ending the year broke in debt.

So is this just a battle between bitter rivals or is there something more nefarious going on in the CCRP? Is there a “Crew” of secret Democrats pretending to be Republicans purposely creating chaos? Or is it just incompetence?

The Anonymous Email that went out:

Pursuant to no rules or Bylaws, the CCRP has a sub group – the “Crew” – who administers the organization.

While the stated objectives of the CCRP is to “The electoral objectives are to elect Republican candidates too local, county, state and national offices.”

The behavior and actions of the Crew has been to do anything that prevents the CCRP from meeting its objective. The Crew has sufficient members on the Executive Board to be completely disruptive.

In the last election cycle the Crew undermined the CCRP Chairman and the organization from:

The Crew asserted that “we are a political party and don’t need to get a message out or advertise”.

2.    When the CCRP Chairman posted the Republican candidates on the web site, the Crew demanded that the candidate information be dropped from the web site immediately.
3.    A Crew leader helped the CCRP arrange debate watch parties – then boycotted them and urged others to boycott.
4.    The Crew undermined and shunned all efforts

a.    For fund raising events

c.     Getting out Republican voters

5.    The Crew refused to let the CCRP Executive Board members know who were the CCRP members.

Thus the CCRP members could not be reached directly by Officers or Trustees to help in get Republican candidates elected.

8.    The Crew refused to provide the Chairman or the Executive Board members copies of prior board meetings minutes in the summer and fall of 2016. In fact, there may not be minutes of Executive Board meetings for several prior years.
9.    The Crew has no problem writing the minutes as they desire without regard to the actual happening. For instance, here is an excerpt form the February 7, 2017 from the Crew:

The actual motion of the meeting was:

Mark Riggins – “Since this is a legal matter, I move that we refer it to legal counsel for a legal opinion”
Chairman “Motion to reman to legal counsel” The motion was seconded and passed.

There was no mention of “stopping further payment” or “breach of contract……..”   The Crew made multiple fabrications and smears during the discussion.

10.        At the same meeting a Crew member stated that Jan Jones representing the Rio reduced the outstanding invoice by an additional $5,000 through email communications in the last 48 hours with the state GOP Chairman. That brought the remaining outstanding balance to $ 5,012.

Jo McDonald gave a copy of said email to Eddie Facey for review – but would not allow anyone else to see it.

Pat Casale, Trustee, made a motion to “Pay up to $5,200 to the Rio as in full for the bill” The motion was seconded and passed.

However the minutes from the Crew includes:

“Jo McDonald presented an email stating that Michael McDonald worked with Jan Jones in August of 2016 to reduce the Rio debt by $5,000. The email stated that payment of the remaining balance is to be paid immediately with legal action to be taken if it isn’t paid.”

Fact: The phantom February email has not been seen since that meeting and the outstanding amount is $10,000.

To date there is no record of the Rio situation being resolved or addressed at any meeting. This was a critical, must be done now only while Chairman Mazzone was in office.

11.  While the Chairman was preparing the technology to resume remote meetings, the Crew sent a notice to members stating there would not be any remote meetings. No Executive Board meeting or vote…….Just Done!

This is only a small sampling of the Crew’s behavior.

The Crew wants your vote on the 18th. Would you like to meet them?