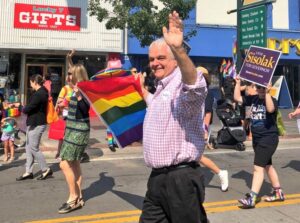 Since November 2019, the ACLU has advocated for tampons in boys’ restrooms in public schools, and now Nevada Dems are following their lead. Gov. Sisolak signed a bill AB224, which requires public schools to equip bathrooms in pubic schools with “menstrual products”.

“While free menstrual products are not uniformly provided in women’s restrooms, they are almost never available in men’s restrooms, even for pay,” the group said in a statement Tuesday.

“Men’s restrooms are also less likely to have a place to dispose of these products conveniently, privately, and hygienically.”

The ACLU argued that it wasn’t a “full or accurate portrayal” to say that women are the only ones who “menstruate, get pregnant, or breast feed.”Menstrual stigma and period poverty can hit trans and non-binary people particularly hard,”

ACLU made a head-spinning comment about gender. On “International Men’s Day,” the group declared that men could both get their periods and give birth. 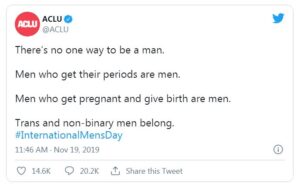 “Men who get pregnant and give birth are men,”

The post opposed an Illinois superintendent’s claim that their client had a “male body” and suggested the school district’s position ran counter to science.

“The superintendent asserts that a girl who is transgender has a ‘male body’ and that transgender students are ‘of the opposite sex’ when defending the District’s position,” the post read. “Such assertions are wrong as a matter of science and offensive because they serve to challenge and undermine the very core of a person’s identity.”

As Reported on Fox News