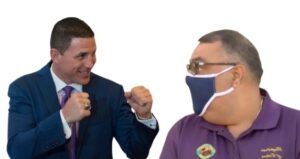 We’ve seen these kinds of lawsuits before and they usually lose when the defendants file their motion to dismiss. But Joey Gilbert convinced Judge Wilson to allow him to do discovery including taking videotaped depositions. According to sources, Joey Gilbert’s legal team took Joe Gloria’s videotaped deposition. Joe Gloria is the Harry Reid Machine appointed Clark County Registrar or the elections department boss.

Gilbert’s lawsuit asserts his team cracked the voting machine algorithms and can now prove they were rigged. In fact he asserts he won the election “by a landslide” with 55,000 more votes than Sheriff Lombardo.

Gilbert also has retained his own experts to testify about the voting machines. His lawsuit is full to graphs and data supporting his assertions.

Prior to the election, the Washoe and Clark County Elections department were ordered by a judge to open up the vote counting process. But according to Gilbert’s team, they admitted to counting votes in secret in direct violation of the court order.

The two Carson City Judges, Wilson and Russell have less than honorable reputations and records. Wilson ruled against Trump back in 2020 when he sue over Nevada Dems’ last minute law change allowing mail in ballots in an August 2020  special session. Russell then ruled against Trump’s lawsuit in December 2020 even with evidence of thousands of dead voters. Russell failed to recuse himself even though his niece is the public information officer for the Nevada Secretary of State. Both judges are up for reelection next year.

Legal Suit —>  STATEMENT OF CASE AND EXHIBITS IN SUPPORT – FILED