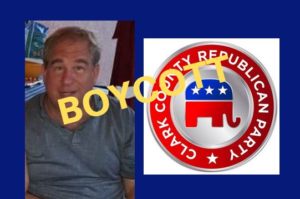 After numerous intentional self-inflicted wounds by Chairman David Sajdak in recent weeks, thousands of Republicans have now spoken out online about his failure to unite the party. David Sajdak is so incompetent he couldn’t win dog catcher if they had Bill Gate’s credit card.

Now the Trump Victory Project of Nevada is calling for a boycott of the Clark County Republican Party until David Sajdak to steps down as chairman.

David has proven to be a corrupt liar willing to say anything to keep his tiny piece of power by allowing members to use their positions to sell political consulting services to candidates.

David has proven to be corrupt when he held a secret meeting on the Friday night before the vote for Chairman to let his friends into the party to vote for him.

David has proven to be a traitor when he called for a primary against President Trump just last month at the NV GOP meeting.

Then David authorized stealing money from President Trump and his reelection campaign.

David must go now or we risk destroying what’s left of the CCRP and losing again next year worse than we lost last year.

So until David Sajdak is gone and a real leader is elected we refuse to donate time and money to the Clark County Republican Party.”