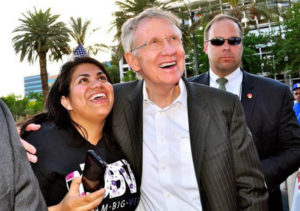 Nevadans for Secure Elections, a group led by former Harry Reid’s campaign manager, Rebecca Lambe, is set to spend millions to pass an extreme and controversial ballot initiative this November. If Question 5 passes on the ballot, the law will automatically register some 700,000 people, including illegal aliens.

I say Illegal aliens because the Clark County Elections Department has said it operates on the honor system and the DMV’s computers do not determine or track citizenship. The law changes the current opt-in to an opt-out system for voter registration, automatically registering everyone who applies for a driver’s license.