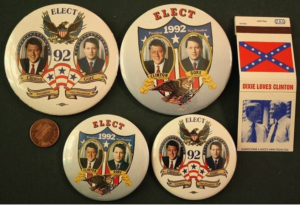 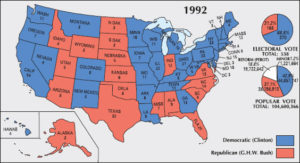 In fact, Bill Clinton won half the Southern States, but President George Bush had very strong roots as a Texas oilman and he actually ran in the 60’s for Congress from Texas.

The fact is President Obama was the first Democrat from the North elected as President since JFK. Lyndon Jonhson was from Texas, Carter was from Georgia and Clinton from Arkansas. So it’s only in the last 8 years that the Democrat Party lost all power in the South and moved away from its Southern Dixie roots.

As the progressives try to tear down Confederate Statues, every History 101 class should be teaching in our country that every Confederate Leader in the Civil War was a Southern Democrat. So all the statues the progressives are trying to tear down are of Democrats. The progressives of today are trying to whitewash the Democrat’s history claiming the mantle of Lincoln as their own and further claiming Republicans of today are the racists of yesterday. Many teachers in public schools are literally teaching that Lincoln would be a Democrat today.

It’s time Republicans stand tall and proud of our Party’s long history of ending Slavery and ending the Jim Crowe Laws and destroying the KKK, a part of the Southern Democrat Party.

It was the Republican President Lincoln and a Republican Congress who the passed the 13th Amendment to the U.S. Constitution ending slavery forever.

Democrat Alabama Gov. George C. Wallace vowed “segregation forever” and blocked the door to keep black students from enrolling at the University of Alabama on June 11, 1963, in Tuscaloosa, Ala.

The civil rights act of 1964 only passed with the help of Republicans.

So we can see why these modern-day book burners on the left are so desperate to tear Statues of Democrats, I mean Confederates, across the country in an effort to rewrite the hate and racist history of the Democratic Party over the last 240 years.