IS BLOOMBERG’S SUPPORT FOR PARIS ACCORD SUBVERSIVE & CRIMINAL?

IS BLOOMBERG’S SUPPORT FOR PARIS ACCORD SUBVERSIVE & CRIMINAL? 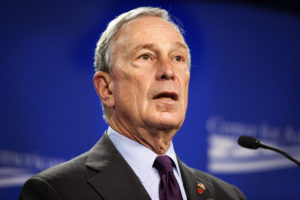 Today, former New York City Mayor and liberal billionaire Michael Bloomberg announced that after President Trump pulled out of the Paris Climate Change Accord earlier this week, he will personally fund the United States’s portion (about $15 million admin fee) and push for its enforcement here in the U.S.

But Federal law makes it a crime for private U.S. citizens to conduct their own foreign policy especially in direct conflict the U.S. government. We have one government and one President at a time. If every billionaire decided he was going to conduct and fund his own foreign policy then that would undermine the authority of the duly elected representatives of the United States.

“Mayors, governors, and business leaders from both political parties are signing onto to a statement of support that we will submit to the U.N. – and together, we will reach the emission reduction goals the United States made in Paris in 2015,” Bloomberg said in a statement. “Americans will honor and fulfill the Paris Agreement by leading from the bottom up – and there isn’t anything Washington can do to stop us.” as reported by CBSNEWS.

According to several lawyers we spoke with, Bloomberg’s actions may have violated the Logan Act.

[The President] shall have Power, by and with the Advice and Consent of the Senate, to make Treaties, provided two thirds of the Senators present

This section shall not abridge the right of a citizen to apply himself, or his agent, to any foreign government, or the agents thereof, for redress of any injury which he may have sustained from such government or any of its agents or subjects.

History Of the Logan Act.

In 1798, amid tensions between the U.S. and France, President Adams sent three envoys to France to negotiate. Negotiations were unsuccessful. Dr. George Logan of Pennsylvania, a state legislator and pacifist, in 1798 engaged in negotiations with France as a private citizen during the Quasi-War.

The Logan Act was basically a response to an effort by a Philadelphia Quaker named George Logan to try to negotiate directly with the French government. This was a big scandal at the time in foreign affairs because Logan—a Democratic-Republican—was trying to thwart the policy of the Federalists, who controlled both houses of Congress and the White House.

— Steve Vladeck of the University of Texas School of Law
/
If cities like Los Angeles follow Bloomberg and attempt to move forward to enforce the Paris Accord without the U.S. Senate having ratified it, they will certainly create a constitutional conflict that will end up in court.
There’s no word yet whether the U.S. Attorney’s office will open an investigation into Michael Bloomberg.
.
Rob Lauer
Poltical Reporter
360Daily.net
.
.