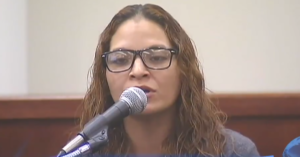 Grand Prairie, Texas, Rosa Maria Ortega was convicted on two counts of voting illegally. But according to a statement from the Texas Attorney General’s Office, Ortega had voted in five elections between 2004 and 2014 according to reports.

Ortega had testified that she didn’t realize the differences in rights between citizens and non-citizen legal residents. The Dallas Morning News reported, there appear to be inconsistencies in her story. She also said, “All my life I was taught I was a U.S. citizen,” even though she marked her driver’s license to indicate that she was not a citizen.

Ortega was sentenced to eight years in prison this week.

In April, Nevada Secretary of State Barbara accused the DMV of registering illegal aliens. Cegaske provided a list of people who filled out voter registration forms at the DMV. From that list, it was determined that 21 non citizens had voted.