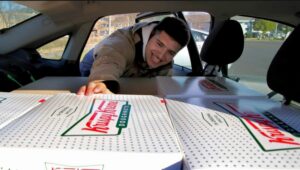 We’ve all seen the story recently about Jayson Gonzalez, the 21 year old college student, of Champlin, Minnesota buying Krispy Kreme Donuts in Clive, Iowa, then driving 240 miles back to Champlin to resell the donuts. We also herd how Krispy Kreme tried to shut him down. But what would Jayson have to do to actually resell donuts legally? Here in Clark County Nevada it would cost around $30,000 if he was allowed to do it at all.

First, Jayson would have to obtain a Nevada Business license at a cost of $700 for the initial filing fees. Then he would have to file for a Clark County Business license, get them to sign off on the zoning, health department, fire department and perhaps get a special use permit which can take 3 to 6 months and cost upwards of $10,000 if he needs legal help. Jayson would then need to do all of that again with the Cities of Henderson, Las Vegas and North Las Vegas.

Then Jayson would need to register his vehicle as a commercial vehicle and obtain a $2 million liability rider.

The entire process could take around 9 months to a year to to clear all the hurdles. But any of the cities and governmental agencies could decide at any time to change their rules and just ban the business model all together after a well funded corporate rival lobbies the right folks.

But there’s hope for Jayson, if he donates money to the right elected officials he may persuade them to allow his business to start up and operate.

But according to some cities, if he takes too long to start his business he may have to start the whole process all over again since many agencies put time limits on when they must start operating by.

Jayson would need to obtain a food handler’s card, a sheriff’s card and possibly a Commercial Driver’s license. Depending on how he set up his business he may need to obtain workerman’s comp insurance.

His vehicle may need to be retrofitted with coolers and a 3 compartment sink and be limited to where it could park and operate. BTW since its a commercial vehicle now he certainly woudl not be allowed to park it at his apartment building.

When Republicans complain about red tape and government regulations this is a small sample of what we’re talking about. Each agency, each city and each county government has the power to arbitrarily fabric rules and ordinances and change them retroactively when they feel like it.

The federal and State governments get the most media attention but it’s the city councils and county commissions that hold the real power over businesses. That’s why it’s so important that people get out and vote for the right folks to hold those offices and then hold them accountable.