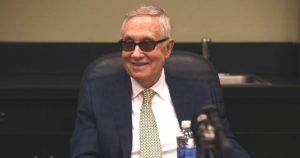 As reported by the Washington Times:

Then-Senate Democratic leader Harry Reid released a letter in the heat of the 2016 election alleging Trump-Russia collusion even though the CIA director at the time urged him not to, according to a person familiar with their conversation.

Mr. Reid’s Aug. 27 letter to the FBI appears to mark the first time a Democrat officially accused President’ Trump’s campaign of colluding with the Russian government to hack his party’s computers.

The letter has come to represent for conservatives the “deep state” — Obama loyalists leaking unproven allegations to the press against Mr. Trump and his people to ruin the campaign, the transition and the White House.

“The evidence of a direct connection between the Russian government and Donald Trump’s presidential campaign continues to mount,” Mr. Reid wrote to FBI Director James B. Comey.

The retired senator has portrayed the letter as having the blessing of Mr. Brennan, a fierce Trump critic who suggests the president is beholden to Russian President Vladimir Putin for fear of blackmail.

But now the Brennan side rebuts Mr. Reid’s contention that the then-CIA director was actively trying to leak damaging anti-Trump information during the election.

Nick Shapiro, former deputy chief of staff for Mr. Brennan as CIA director, told The Washington Times that his ex-boss considered the information sensitive. He expressly urged Mr. Reid to confine the information to private discussions with Mr. Comey.

That August, Mr. Brennan was briefing the so called “gang of eight” congressional leaders on Russian computer hacking and on suspicious that Trump people were involved.

“Brennan used the same exact notes to brief Reid as he used with the other members of the Gang of Eight. In fact, most of the conversation was spent with Senator Reid telling Brennan what he had heard about Russians and the Trump campaign. Senator Reid informed Brennan that he was in the process of drafting a letter to Comey about his concerns. When Senator Reid asked Brennan whether he could reference this information in the letter to Comey, Brennan said ‘no,’ as the intelligence was being tightly controlled and he was worried that the letter would get out into the public. Brennan told him that Comey had been fully briefed on the intelligence and if he wanted to, it would be better to talk to him about it in a secure manner when he returned to D.C. instead of putting it in a letter.”

Mr. Reid, Nevada Democrat, wrote the letter anyway. And it was leaked to The New York Times and then migrated throughout the mainstream media.

It contained references to a Trump aide traveling to Moscow and allegedly meeting with two sanctioned Kremlin figures — an allegation contained in the Democratic Party-financed dossier written by ex-British spy Christopher Steele. The unnamed person is Carter Page, who has denied under oath he ever met the two people named by Mr. Steele.

The dossier at that point had not been published. The FBI possessed copies and had opened a counter-intelligence investigation into Russia meddling the previous month.

Mr. Reid’s version of his phone call from Mr. Brennan is contained in the best-selling book, “Russian Roulette,” which embraces the Trump-Russia conspiracy and promotes the Steele dossier.

“Reid also had the impression that Brennan had an ulterior motive,” the authors said. “He concluded the CIA chief believed the public needed to know about the Russian operation, including the information about the possible links to the Trump campaign. When Reid later was asked if Brennan directly or indirectly had enlisted him to push information held by the intelligence community into the public realm, he told an interviewer, ‘Why do you think he called me?’ “

Mr. Shapiro, Mr. Brennan’s adviser, said that specific book excerpt is inaccurate. He also told The Times that rather than trying to sell Trump-Russia collusion during the campaign, the Obama White House and Mr. Brennan stayed silent.

The Washington Times submitted questions to Mr. Reid’s associates at a public policy institute in Nevada where he serves as co-chairman. The queries went unanswered.

Mr. Reid did not stop his drumbeat on Trump-Russia. After Mr. Steele leaked his dossier narrative to selected reporters in Washington, Yahoo News, whose Michael Isikoff co-authored “Russian Roulette,” wrote a story.

But The New York Times dampened the narrative with an Oct. 31 story headlined, “Investigating Donald Trump, FBI Sees No Clear Link to Russia.”

Adam Jentleson, his deputy chief of staff, tweeted, “I’ll say it: NYT interviewed Reid for this story. He said things contrary to the story. NYT discarded the interview.”

“Maybe some want to know why the NYT seemed to cover for Comey’s FBI? Maybe even some at the NYT? Maybe not? I’m just asking questions,” Jentleson said.

The New York Times would go on to become one of journalism’s chief proponents of Trump-Russia collusion.

The Washington Times has examined Mr. Steele’s series of collusion charges and found that none has been confirmed independently and publicly at this point. Special counsel Robert Mueller continues to investigate.