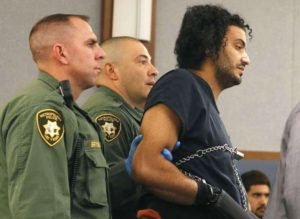 A Las Vegas judge set bail at $500,000 for a 37-year-old Mohamed Abdalla Mahmoud who has been charged with 6 counts of attempted murder and 5 charges of discharging a gun after allegedly actively shooting up a Ross store and engaging Metro Police in a fire fight.

Mohamed Abdalla Mahmoud stood shackled, supported between. The Clark County prosecutor called it “astonishing” that none of the more than 40 people in the Ross Dress For Less store was wounded in the Aug. 11 shooting. Police say Mahmoud shot 16 rounds in the store. The judge imposed house arrest and a mental health evaluation prior to the Sept. 4 preliminary hearing.