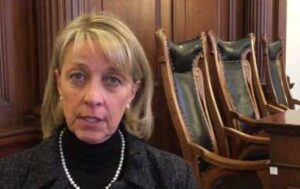 President Trump made good on his threat to sue Nevada to stop the Mail-In-Ballot Scheme cooked up by Dems last weekend naming Nevada Secretary of State (SOS) Barbara Cegasvke “in her official capacity” as the defendant, not Governor Sisolak.

The complaint seeks declaratory and injunctive relief. In other words, the lawsuit seeks to declare Nevada’s law, Assembly Bill 4, illegal and seeks an order blocking its implementation in the upcoming November General election.

Instead Fraud, RINO Trader, Cegasvke is fighting Trump’s lawsuit in Federal court. Cegasvke filed a motion to throw out the President’s lawsuit. That’s right, Cegasvke sided with Sisolak and the Dems on the mail-in-ballots.

Today, Cegasvke sold out her, friends, her supporters, her party, her state, her President, country and above all she sold her soul.