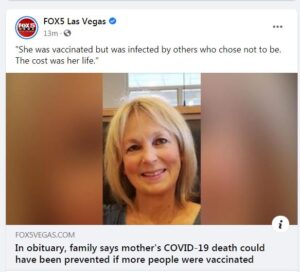 Today, Vegas Fox 5 News published a story, originally written by CNN, that many folks say cites violence against unvaccinated Americans. The article claimed a fully vaccinated woman was killed by CV19 that she contracted from unvaccinated folks. Now mind you there is zero evidence provide in the story for any such link.

The Vegas Fox 5 post reads “She was vaccinated but was infected by others who chose not to be. The cost was her life”

One person we spoke with was so concerned they filed a compliant with FB. But FB responded saying the article did not go against their community standards regarding inciting violence. 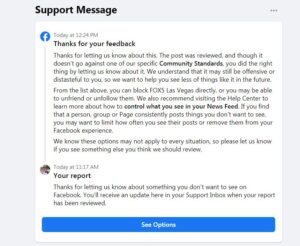