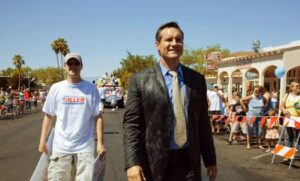 In 2010, the son of former Nevada Gov. Bob Miller, Ross Miller (one of Harry Reid’s hench men) was the Nevada Secretary of State responsible to overseeing the elections of the state, including mail-in-ballots sent to troops fighting in Iraq and Afghanistan. Robert Lauer & John Doe v. Nevada Secretary of State Ross Miller filed on behalf of 34 members of the armed forces who did not received their mail-in-ballots from Democrat SOS Ross Miller.

I was the plaintiff along with an Air Force Officer who was afraid of retribution so we keep his name as John Doe. Back during the war, Dems often played games with the mail-in-ballots of our troops because most were Republicans. There was a concerted effort on the part of many Dems to deny our troops the opportunity to vote from the battlefield.

I personally never received my ballot for 2006 the election, while stuck on an Army base. I remember how frustrating it was not to be able to vote and not able to contact anyone to get a mail-in-ballot to vote. Ironically, I pushed for laws requiring the State to send out mail-in-ballots to all the troops without any request forms from them, because I knew it was often extremely difficult for soldiers to download a mail-in-ballot request forms and mail it while living in a tent.

So, when I saw Ross Miller failed to insure all our troops who had requested a mail-in-ballot had not received one under strict time restrictions so their vote would be counted I was outraged. My Federal lawsuit against the Nevada Secretary of State succeeded in insuring our troops got their ballots, time was extended for them to be counted and future errors would be actively avoided.

The Federal Court ruled my case was valid and justified, forcing Ross Miller to send our troops their mail-in-ballots to our troops fighting overseas had their voice heard at the ballot box.

The State of Nevada is the legal voting residence of many men and women in the United States Armed Forces who are physically absent from this country while serving overseas. Nevada is also the legal voting residence of numerous other non-military U.S. citizens who are currently located outside our country’s borders. As these voters are unable to vote in person in Nevada, they must cast absentee ballots in order to exercise their right to vote. To protect this right to vote in federal elections, Congress passed the Uniformed and Overseas Citizens Absentee Voting Act, which preserves the federal voting rights of certain United States citizens formerly residing in the country but who now reside outside the United States. See 42 U.S.C. § 1973ff-1, et seq. Specifically, UOCAVA provides that certain military voters and certain overseas voters shall be permitted by each state “to use absentee registration procedures and to vote by absentee ballot in general, special, primary, and runoff elections for Federal office.” 42 U.S.C. § 1973ff-1(a)(1).

UOCAVA was recently amended by the Military and Overseas Voter Empowerment Act of 2009, which created additional protections for members of the military, their families, and other overseas voters. Among these new protections is the requirement that states must mail absentee ballots to military and overseas voters no later than forty-five (45) days before an election, if those voters requested the ballots forty-five  (45) or more days prior to the election. See 42 U.S.C. § 1973ff-1(a)(8)(A). For the 2010 federal election cycle, the deadline to send out absentee ballots to military and overseas voters who had timely requested an absentee ballot was September 18, 2010.

This lawsuit arose when Elko County, Nevada missed that September 18, 2010 deadline and sent out thirty-four (34) absentee ballots up to five days late, apparently due to a printing error on the part of a private contractor. ( See Griffin Aff., ECF No. 13-2; Smith Aff., ECF No. 13-1.) Plaintiffs subsequently filed this lawsuit, requesting injunctive relief to ensure that the military and overseas voters receiving these tardy ballots will not be prejudiced by Elko County’s failure to abide by the deadline set forth in UOCAVA.

So Miller quickly acted and sent out the mail in ballots to the overseas troops ending the lawsuit in favor of the troops.