Yesterday in Washington D.C., Democrat Congresswoman Dina Titus from Nevada joined 58 other wingnut Democrats in the House who voted to impeach President Trump. The bill introduced by Democrat Al Green of Texas was defeat by a majority of Democrats.  364-58 voted to table an impeachment resolution.

Even  House Minority Leader Nancy Pelosi (D-Calif.) and Minority Whip Steny Hoyer (D-Md.) against the resolution. Congressman Green’s claimed the articles of impeachment were appropriate because of “Trump’s equivocating response to the violent clash between white supremacists and counterprotesters in Charlottesville, Va.; retweets of anti-Muslim videos posted by a fringe British nationalist group; criticisms of NFL players kneeling during the national anthem to protest police brutality; disparate treatment of hurricane victims in Puerto Rico compared to Texas and Florida; and personal attacks against Rep. Frederica Wilson (D-Fla.), who, like Green, is a member of the Congressional Black Caucus.”

Titus’s Congressional District in southern Nevada has only 28 percent registered Republicans, meaning its heavily gerrymandered. So only another Democratic can possibly defeat her.

Here is the list of other Democrats who voted to impeach President Trump yesterday along with Dina Titus: 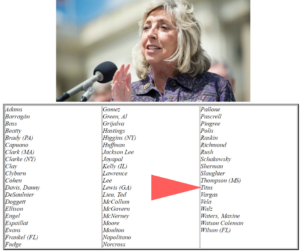