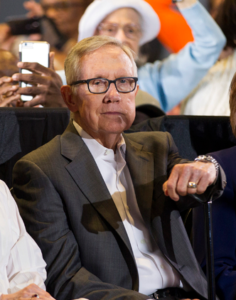 Last year Senator Harry Reid claimed severe injuries to his face were caused by falling off an exercise machine of some kind or a rubber band braking and striking him. Well Harry Reid attended Hillary Clinton’s event Thursday at the Culinary Union with his face swollen again.  Last year some had speculated he fell down drunk hitting his face while others claimed he had been in a fight with his brother who was arrested later that night drunk. His office didn’t bother issuing a statement. But all of Nevada is waiting to find out what the story is this time.