This is what really happened on July 20, 2021 at the Clark County Election.

After the Never Trump Clark County Chairman Dave Sadjak cancelled Trump endorsed Candidate for Chair, Jesse Law, in the middle of the night, the day before the election, hundreds of Trump supporters showed up to vote anyways. Not sure if Sadjak planned to have only 1 old lady assigned to sign in new hundreds of new members outside in 109 degree heat or if it was his usual incompetence.

But after waiting for an hour in 109 degrees to sign in, with 10 other staffers standing around not helping, like Walmart at 5pm, the crowd demanded to be let into the meeting. These folks were there to participate in the Clark County Republican Party. Instead of going outside and talking with them, David Sadjak called the police and had them thrown out. Some 20 police officers showed up to throw out a bunch of 65 year old seniors sitting around in the heat outside waiting to get into the CCRP meeting. 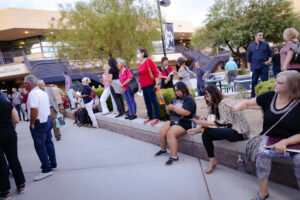 Then, after all that corruption, Sajdak’s candidate didn’t have the votes to win. So he unilaterally and illegally shut down the meeting without a vote of approval from the membership body. Sajdak technically put the meeting into recess.

So Sajdak forgot to mention he removed the leading candidate Jesse Law from the ballot the night before the election without cause on CNN. Or that he shut down the meeting, not he proud boys.

Today we await response from Jesse Law and NVGOP Chairman Michael McDonald at the state party fall meeting. Let’s see Sajdak will be at the meeting today.

This wasn’t the first time Sajdak back stabbed Republicans. On July 18, 2020 Republican Las Vegas City Councilwoman Michele Fiore stepped down as Mayor Pro Tem after she was knifed in the back by CCRP Chairman David Sajdak over some flipped comment she made at the Clark County Republican Party Convention a week ago. It wasn’t a Democrat who first attacked her. It was village idiot Dave Sajdak, who emailed out a press release condemning Fiore not even knowing what she said.